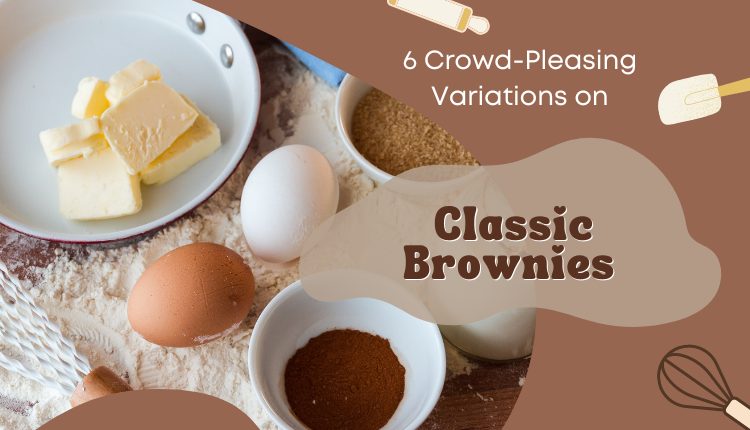 Brownies are effortless to whip up in a pinch, whether baking from scratch or using a box mix, delighting a crowd with each bite. However, your recipe depends on the brownie you want to serve — chewy, fudgy, cakey, nutty or crunchy.

Perhaps you want to stir in extra chocolate chips or top them with walnuts, peanut butter chips and marshmallows. If you’re already a fan of brownies — how could you not be — these six classic brownie variations will certainly cause your mouth to water.

Who doesn’t like rocky road ice cream with its tasty swirl of chocolate, crunchy nuts and gooey marshmallows? Now imagine that flavor combination in a batch of brownies.

Use either a stir-and-bake box or mix melted butter, eggs, vanilla, sugar, cocoa, flour, salt and baking soda in a bowl. Transfer the batter to an 8-inch pan and bake at 350 F for 20 to 22 minutes.

Remove the brownies from the oven and sprinkle chopped cashew nuts, chocolate chips and mini marshmallows. Place the pan back into the stove and bake for another five minutes or until the marshmallows get puffy.

Coffee lovers will enjoy sinking their teeth into a café mocha truffle brownie, baked to perfection with a blend of coffee and cocoa.

For this recipe, you’ll need unsweetened cocoa powder, sugar, melted butter, vanilla, eggs, flour and caramel syrup. Additionally, coffee will intensify the chocolatey richness of your brownies with the most pleasing taste.

Brew a pot of coffee and allow it to sit until cooled — then add the coffee, vanilla, cocoa, eggs and melted butter to a large bowl. Stir in sugar and flour and pour the batter into a baking pan. Parchment paper or nonstick spray will prevent the batter from sticking. Finally, weave in caramel drizzle using a knife.

Bake the brownies for 30 minutes at 350 F or until a toothpick can be inserted into the center and pulled out clean. Allow the batch to cool before you cut into it.

If you and your partner are of the 65% of Americans who love camping, you know the weather isn’t always conducive to sleeping under the stars. However, you can still create a fantastic indoor camping trip at home with a batch of s’mores brownies.

Crush graham crackers into crumbs and combine with sugar and melted butter in a bowl. Pour the graham cracker mixture into a 9-inch lined pan and pack the crumbs down with the bottom of a glass — bake for 10 minutes at 350 F.

While the crust is in the oven, prepare a box of brownie mix and add chocolate chips or chunks to the batter. You can also make your brownies from scratch.

Pour the batter over the graham cracker crust and bake for another 25 to 27 minutes. Sprinkle more chocolate chips and cover the top with mini marshmallows before they’re done. Place the pan under the broiler on low for a few minutes, but make sure they don’t burn.

You might agree these s’mores brownies are better than the real thing.

Many people profess a simple slice of cheesecake as their favorite sweet treat — but add a fudgy brownie base with a marbled cheesecake topping, and you might give the classic dessert a run for its money.

Make your brownies with a box mix or by scratch, folding chocolate chips into the batter. Reserve a half-cup of batter in a cup and add the rest to an 8-inch or 9-inch square pan.

Whisk cream cheese at room temperature in a stand mixer on medium speed for three to four minutes. Slowly add sugar, salt, vanilla and eggs and continue to blend on low.

Spread the cheesecake mix over the brownie batter in the pan, swirling the remaining batter over the top with a skewer. Bake for 10 minutes at 350 F before lowering the temperature to 325 F for another 35 minutes.

Prepare the brownie mix and pour the batter into a lined 8-inch square pan. Evenly spread mint candies over the top of the brownie batter and bake at 350 F for about 40 minutes.

Make the mint frosting while the brownies cool. Beat butter in a large bowl with a hand mixer until it’s fluffy, then add powdered sugar, milk, green food coloring and mint extract. Continue to mix until smooth and gently stir in mini chocolate chips.

Spread a thick, even layer of frosting over the brownies and sprinkle chopped mint candies over the top. You might even spoil your guests by serving the brownie squares on a chocolate-drizzled plate with a mint leaf garnish.

Over 1% of Americans have celiac disease, while 6% of the United States population follows a gluten-sensitive diet. Thankfully, a gluten-free brownie variation is available for dessert enthusiasts with this dietary restriction.

The trick to getting your brownies extra fudgy is to melt chocolate and coconut oil over low heat before stirring it into the other mixed ingredients. Feel free to add additional chocolate chips or nuts before pouring the batter into a lined 8-inch square pan.

After baking in the oven at 350 F for 20 to 24 minutes, sprinkle the top with coarse salt and allow the brownies to cool.

Brownie Variations That Aim to Please

Brownies are delicious on their own, but switching things up with a crowd-pleasing variation takes this sweet, chocolatey dessert to a whole new level. Impress your guests with one of these recipes — or bake a batch to enjoy all by yourself.

12 Best Gifts for Someone with a Sweet Tooth

7 Must-Have Upgrades for Your Kitchen

Cooking With a Chronic Illness

5 Restaurant Emergencies and How to Prepare for Them

5 Things to Know Before Switching to Keto