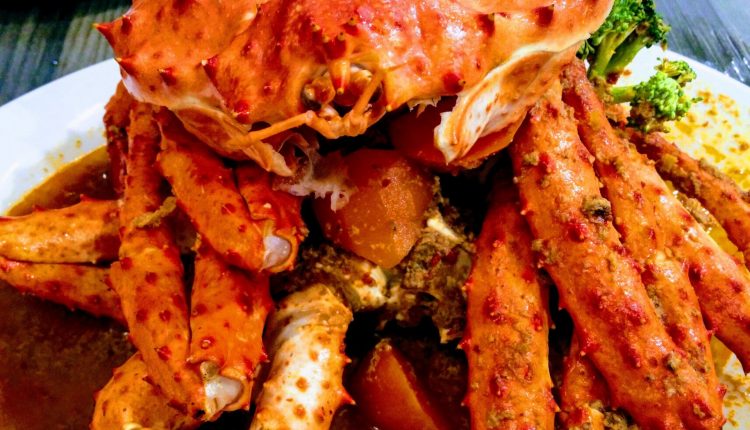 Should You Get King Crab or Snow Crab for Your Next Party?

Are you hosting a guys night in the near future? Perhaps you’re planning a birthday party or small get-together with family. If you want to impress your guests and send them off satisfied, whip up some delicious appetizers and finger foods. Has it been a while since you’ve seen each other? Pull out all the stops and order some crab legs.

Eating crab is a heavenly experience, one that you should share with others. At this point, however, you might be wondering which kind of crabs have the tastiest legs. King crab and snow crab have some of the finest, but which one should you get for your next party?

The only way to decide is to consider various factors that may affect its price, size, quality and taste.

Edible crab varieties come in all shapes and sizes. However, king and snow crab are some of the biggest. King crabs weigh six pounds, on average and can be up to six feet long. Snow crabs are smaller and typically weigh between two and four pounds. Although king crabs are larger in size, they do have shorter, thicker legs, whereas snow crabs have long, slender ones.

Jumbo king crab legs are the biggest of all crab groups, and there are various types available. From Alaskan king crab to red king crab, these behemoths offer a full meal to whoever’s willing to crack some legs and remove the meat.

How much crab meat do you actually get when you buy crab legs? Of course, the shells account for some of the crabs’ weight, and the snow crab has a thinner shell, so you might expect them to yield about the same amount of meat. However, it turns out king crab has the highest meat-to-shell ratio. A pound of king crab legs is 60% to 75% pure crab meat, twice as much as you’d get from a snow crab!

Just because they’re the meatiest doesn’t mean they’re the best, though. Seasonality, ease of eating and personal preference all come into play when choosing which crab to order for your next party.

While weight and price may be your main concerns when ordering crab legs for a party, you should also consider the difference in texture when choosing between king crab and snow crab. Of course, shipping delays and how you prepare your crabs can affect how tender or tough the meat is. But, in general, snow crabs tend to have a firmer feel. The meat breaks off in long pieces and shreds almost like corned beef.

King crabs might be meatier, but they’re also spinier and harder to crack. You need a special tool to break open the legs, so they could make a mess and intimidate some guests. Meanwhile, snow crabs are hand-crackable and easier to de-meat, which makes them good finger foods.

Flavor plays a key role in whether you’ll pick king crab or snow crab, too. Many people describe snow crab as having a sweet, slightly briny flavor. King crab is sweet, too, but it’s richer than snow crab. Some might even say it tastes buttery, much like lobster. Perhaps that’s why it pairs so well with lighter fare like salads, veggies and dip and even fruit. Serving these and other appetizers will offset the heaviness of the crab meat and balance the palate.

The fishing season between snow and king crabs varies depending on weather, temperature and migration patterns. This seasonality will inevitably affect availability and, ultimately, price.

Harvest season for king crabs begins in October and lasts until mid-January. The freezing temperatures create the perfect condition for these cold-water crustaceans. Thus, if you’re hosting a party during the holidays, you might want to take advantage of discounts on king crab. The harvest season for snow crabs also begins in late fall but extends into the early weeks of summer, so it’s more readily available and affordable.

These past few years, catch limits have reduced the number of king and snow crabs that fishermen can harvest. This year, the snow crab catch limit of 5.6 million pounds is down a whopping 88% from the previous season. Last year’s king crab fall harvest was also canceled due to a decline in female crab populations.

Lower harvest limits mean lower availability and higher prices. If you’re close to Alaska, you might be able to get your hands on the meat for a cheaper price. However, if you want to save money, you could purchase snow crab meat until king crab populations recover and prices return to normal.

Should You Get King Crab or Snow Crab?

Now, you have plenty of factors to consider when choosing whether to get king cran or snow crab. However, your decision will ultimately come down to party details like guest count and atmosphere.

Are there just a few friends on the guest list? Planning a black-tie event? Splurge a little and get the richer, rarer and more expensive king crab. On the other hand, if you invited your entire family and are trying to save money, opt for in-season and oft-cheaper snow crab. Super Bowl parties and other more laid-back events may also call for cheaper, more crackable crab legs. It’s all up to you, and either choice will be delicious, so it’s a win-win.

Learn About This: One Tropical Loophole That Dissolves 2½ lbs In 24 Hours

Eating in Your Car? Avoid a Mess With These 7 Tips

How to Make the Best Healthy Desserts

The Benefits of Buying Frozen Foods Instead of Fresh

Why Your Food Franchise Needs a Great Location

5 Best Take-out Franchises You Should Consider in 2023

Vegan-Friendly Things To Consider for Your Diet